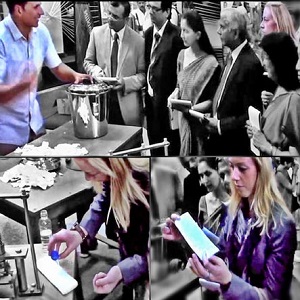 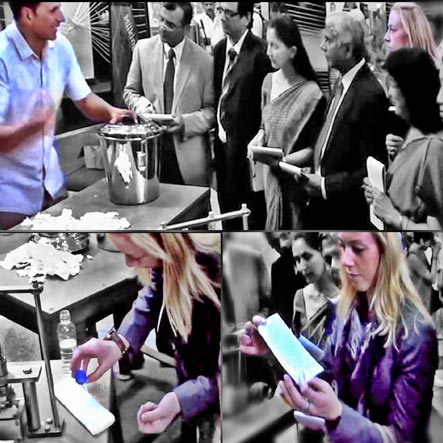 April 2017- I landed back from a business trip in India. I found my driver at the airport. While driving home I acclimatized and enjoyed being back in India, which became my home country.

I checked a few messages, one was from my agent.

I have to tell you that I am playing small roles and extras once a while, since 15 years now. I started in Germany and also played an extra in “Bhaag Milka bhaag”. You see me for an blink on an eye, lol. But it was a great experience.

So my agent asked me in the message if I want to be a part of a big Bollywood movie, 2 days shooting.

A few days later I was in the early morning at the NIIT campus in Delhi; ready for the shooting and excited what will happen.

As I came from Gurgaon to Delhi, I was with another lady, a saxophone player from Japan. First step to take was cloths, then make up and hair. Then a lot of waiting time, this is typically in all shootings, all over the world.

On the set we the extras, figured out finally what we will exactly need to do. It turned out that I will play the role of a judge. What to judge about what – no idea at that time. We spent the waiting time in a room – in total 10 people, 8 who played judges and 2 actors who had some speaking roles. We created an interesting time while our 3 hours of waiting. I even gave a small speech, what was very unexpected and spontaneous.

All of us had real fun and felt very connected very well and then finally after lunch my work started.

We entered the set. It was a contest of inventions. The Indian filmmaker R. Balki was in the middle of all of the people, running here and there. Akshay Kumar and Sonam Kapoor were there, and also an elder person who explained us one of the inventions – a sanitary bag.

I realized only after some time who he was and what was the story all about.

That movie was about a real story. That elder man was the inventor of affordable sanitary bags for women. Arunachalam Muruganantham explained us the entire machinery and showed us and Akshay Kumar how it works.

Then it was time to shoot. Akshay Kumar’s turn came. He then explained, as the inventor in the movie, how his production works.

In this scene he needs desperately to go to the washroom, but has to wait for the jury – to showcase and explain his invention to us- the jury.

We did this scene over and over again, as it is very usual while shooting movies, because something was not right. Either some extra looked straight into the camera, some other time there was somebody running in the background, or or or…

In the scene which we shot I tested that sanitary bag, in awe, if it really keeps liquid, so I drop some water from my bottle on this bag, to check it out.

In one time repeating again that scene, Akshay Kumar went finally to the toilet, but instead of rushing to the toilet, he comes to me and asked me, “Do you like it Ma’am…?”

I replied spontaneously, “ yes, it is wonderful!”.

Sadly they didn’t keep that scene, but it made me really happy

After waiting for the movie it was then finally announced that the release will be on 9th of Feb 2018 – wow, at the same day when my book Change me get released, what a coincidence.

So in the morning my agent, my team and another judge went to that show and had a great time. Then I got ready and went straight to my book release.

I must say this movie is a very good movie with depth. Why, because it shows a lot of the culture and how people deal with women who menstruate.

For me, coming from Europe, it is a normal thing. Because my earlier culture I lived in was and is like that – accepting the womanhood as it is, not being proud of it, not being embarrassed about it. It is normally accepted because it is how we are as human beings, as women!

And we women should stand up for it, if needed.

That fact has to be celebrated – and to menstruate is a part of it. Period.

The movie was a great experience for me personal, as Life is an adventure.

But even bigger –as it a good and needed step ahead in India’s societies development.

Her new book, “Change Me” was published in January 2018 and is available in the stands in India and national and international online (in India: Amazon, Flipkart; internationally: Amazon). It’s the story of Amit, his trials and triumphs, and how he realises that although the journey to success is your own, you don’t need to do it all alone. Through the book, Jasmin guides you to look within and reflect upon who you are and who you want to be and understand for yourself the path you can travel to change yourself into a even better version oof yourself.